During Women’s Sector Stand: Demanding the immediate release of prisoners in Israeli prisons

Tens of women, human rights activists, and civil society organizations representatives have demanded the release of Palestinian female prisoners from Israeli prisons and stop the violations committed against them by adhering to the international laws and systems.

They have also stressed for the international community to assume its legal and moral responsibilities towards holding the Israeli occupation accountable for its violations of human rights against Palestinians, especially male and female prisoners.

This came during a sit-in organized by PNGO women's sector in front of the Red Cross HQ, in solidarity with the female prisoners and detainees in the prisons of the occupation, especially the prisoners on hunger strike, to support their just demands, and to express the position of the Palestinian civil society supporting them in facing the occupation and its policies. The sit-in came as part of the 16 Days Campaign to combat Violence against Women.

The sitter chanted slogans calling for the release of female prisoners in the Israeli prisons and the halt of all forms of abuse and torture against them.

The participants also raised signs that necessitated the immediate release of prisoners and held the Israeli occupation responsible for their deteriorating situation.

On the same note, they asserted the need for the International Committee of the Red Cross to assume its responsibilities towards Palestinian prisoners exercising their full rights. That starts first by stopping the crimes and violations against them by enforcing international law and treaties.

Adding to that, they demanded that the basic needs of female prisoners be provided as well as their special requirements. That also encircles putting prison administration treatment of prisoners under the microscope. In other words, how the prison refers prisoners to trial and transfers them. 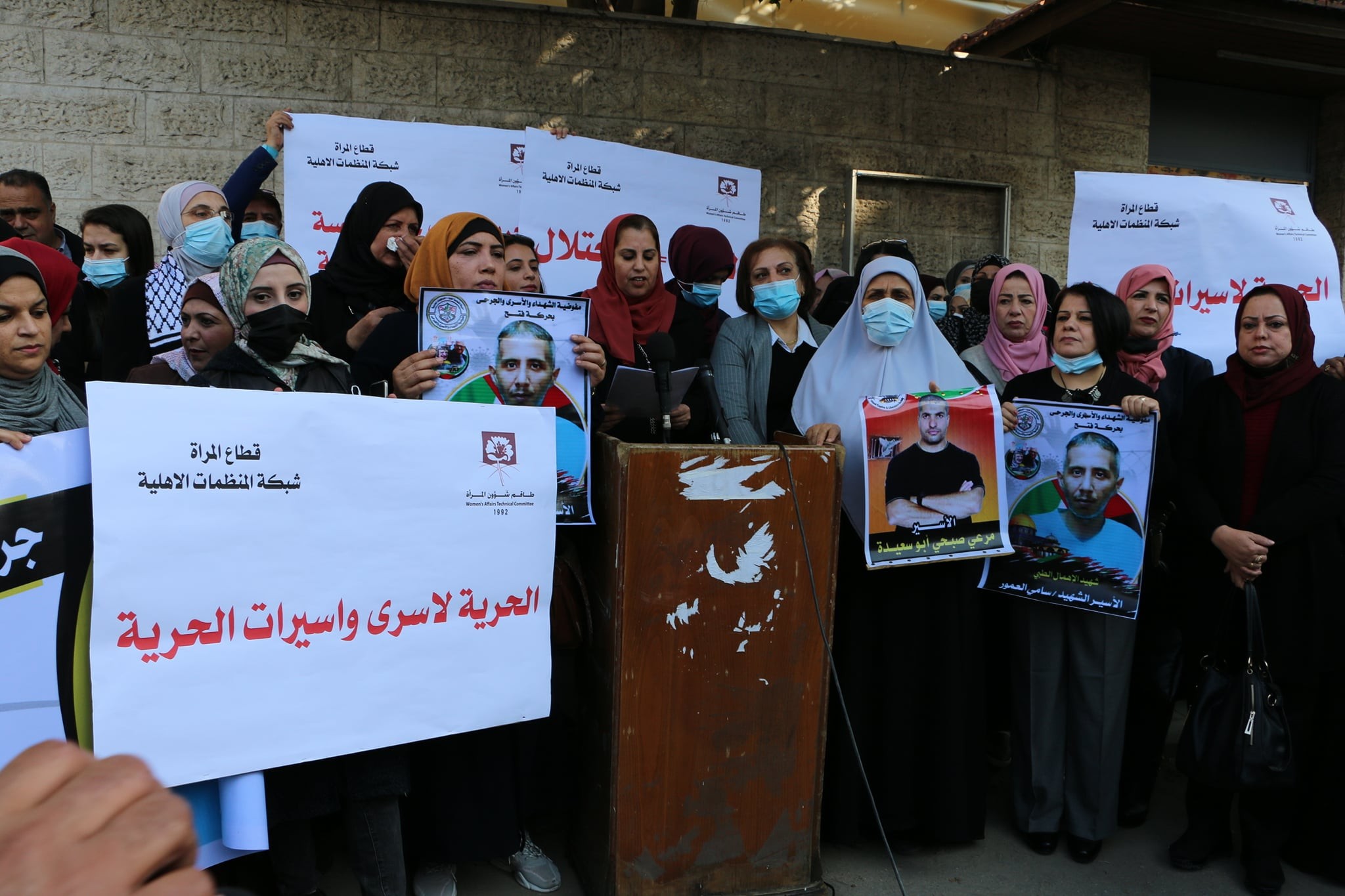 In the same sense, the participants called on Palestinian political decision-makers to place the issue of female prisoners on the top of their national priorities and to take action at all levels to support their steadfastness and guarantee their freedom.

Sahar Yaghi, The Palestinian Development Women Studies Association Chairman, read during the protest a letter by PNGO Women's sector, “Today we stand within the 16 days campaign to fight violence against women,” she said, “this comes at a time when Palestinian women are still being killed, arrested and their full rights are violated by Israel through its repressive practices against them and all our people. Palestinian female prisoners live in very difficult humanitarian conditions inside the Israeli prisons and detention centers.”

Yaghi highlighted that the female prisoners suffer from a policy of deliberate medical neglect, whether for sick or wounded cases who were injured as a result of the Israeli aggression, and the absence of a gynecologist in the prison clinic to care for female prisoners, and the failure to dispense appropriate medicines for the sick cases among them.

The letter put on display that the Israeli occupation bears full responsibility for the crime of killing of the prisoner Sami Al-Amour, who is the latest medical negligence victim. That brings the number of dead prisoners to 227 martyrs since 1967.